So, cruising in the San Juan’s/British Columbia is going to mean anchoring in a fair amount of smallish coves where we’ll need to tie Charisma’s stern to land to keep her from swinging into the rocks. Today I rigged up a cheap (read: free) reel for the 300 feet of polypropylene line I bought for this purpose. Walked around town until I found an empty spool, then drilled a hole for the handle which I made from some scrap pvc pipe and voila!…our new stern line storage. 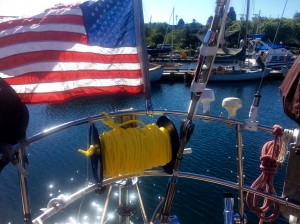 We’re planning to leave Monday or Tuesday pending the weather. We’ll probably head to Friday Harbor and maybe Suicia for some hiking, then after a few days cross into BC at Sidney. I bought my Canadian non-res fishing license today, so we’re ready on the fishing side. Ann’s been waxing and polishing the topsids and stocking up provisions and I’ve been doing some touch up varnishing and now I’m going to empty the lazarette and get it organized.

One thought on “Stern Tie Kludge”