And it’s not where you’d think we would see them.

We’re comfortably anchored in Whangamumu Bay. It’s really more like a little cove, but a really nice spot, surrounded by beautiful, hiking country. That’s what we were doing when we saw the orcas (Killer Whales). 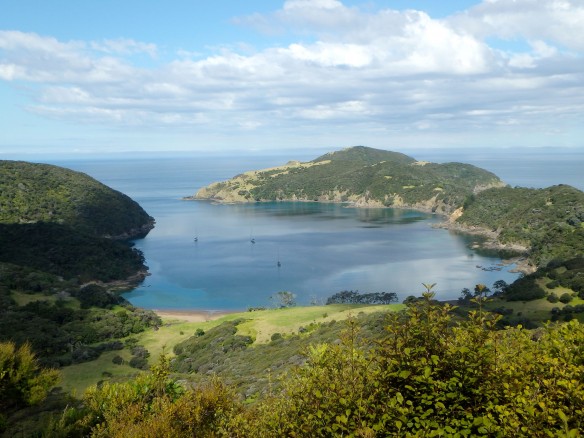 Today we decided to hike out toward Cape Brett. I say “toward” because it’s too far to go in one day. As it was we hiked a six hour round trip from the Whangamumu whaling station to the Cape Brett trail and then out the trail a ways. Major UP and DOWN and some stunning views along the coastline (that we’ll post in a couple days when we’re back to internet-land). 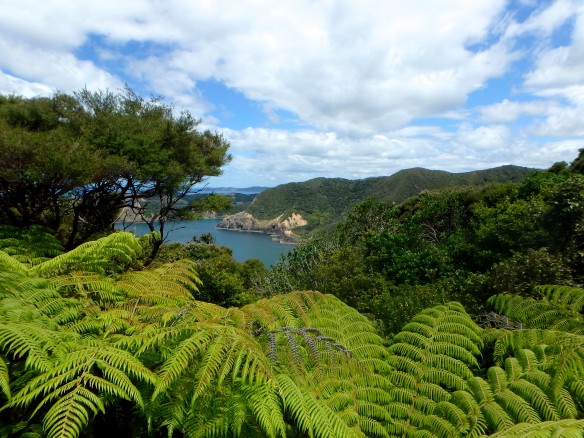 Beautiful coastal views through the ferns. 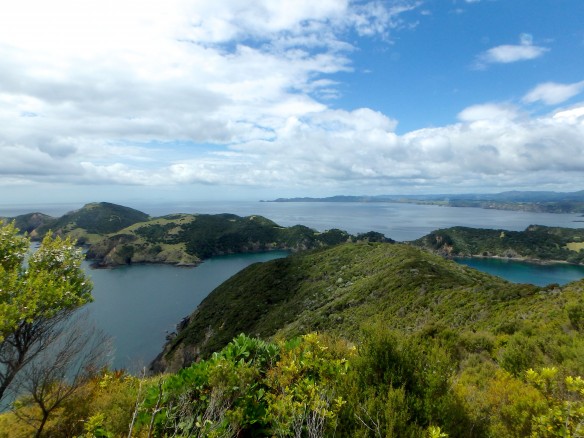 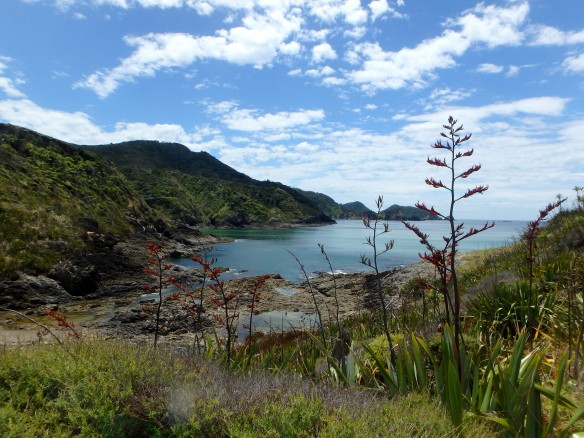 One of the views on the "down" part of the hike.

So…we were on the coastal part of the walk when Ann said, “Look, there’s some whales over by that beach”. I looked over and seeing something surfing in on a wave and not believing that could be whales, said; “No, those aren’t whales, they are surfers”. A moment later, we both saw the giant vertical dorsal fin that is the signature of a male orca (it can get as tall as six feet – and one of them looked all of that). Wow! You don’t see these guys every day, but it got better.

Over the next ten minutes we watched them work their way along the rocks and kelp from the beach to a little inlet where we were standing on a cliff about 100 feet above. As they came around the edge of the cove they headed right into the inlet we were standing over. We were looking right down at them as two of them worked their way, very methodically, into the tiny inlet – exploring every nook and cranny. As they rolled sideways in the clear, shallow water we could see their signature white “saddle” under their belly. Spectacular! They were in water barely deep enough to support them poking at the kelp and all the little rock crevices. That’s when it hit us! They were looking for stingrays, penguins and/or seals.

There were about five whales (maybe a sixth young one, we couldn’t quite see) and they were working in two groups. It was fascinating to watch how carefully and thoroughly they were working. My previous encounters with these fantastic creatures have been similar. They are just plain smart. It’s spectacular to watch. 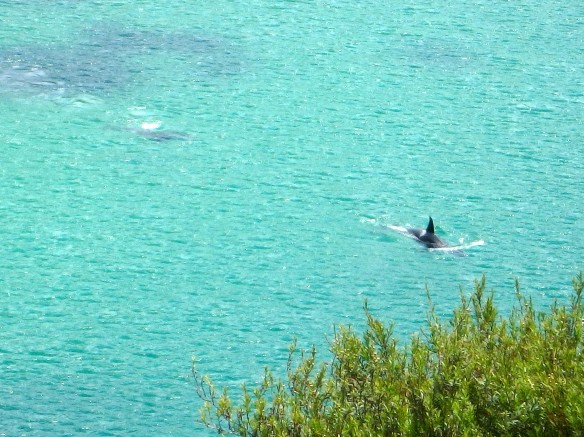 The only clear picture we got, then they were right below us and the camera wouldn't focus through the tree branches. This is a male (tall fin). A female is barely visible under water behind him.

We both agreed that it the chance encounter of a lifetime that we rounded the corner and had a view over the bay at exactly the same time the orcas were “working” that part of the coast. Amazing!

The rest of the hike was less spectacular, but no less beautiful. Coastal views of breathtaking mountainous terrain constantly showing itself.

Today we feel truly blessed by the beauty if not entirely exhausted by the six hour hike.

And we ended the day watching the fog roll in with a Charisma in hand.